Grolier Club member Richard Ring  is pleased to announce the availability of the following publication: 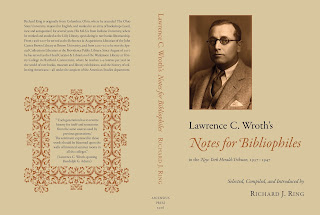 Lawrence C. Wroth (1884-1970) was a librarian of the first rank among those at work when the "golden age" of private book collecting in America was waning, institutional interest was waxing, and gentleman-scholars were being replaced by professional scholar-librarians.
The “Notes for Bibliophiles” he wrote for ten years in the New York Herald-Tribune were brief and intended for the general public, but they were written by an acknowledged authority on bibliography, printing history, and the history of colonial America. Reproduced herein are articles on figures as diverse as Wilberforce Eames, Daniel Berkeley Updike and A. S. W. Rosenbach; on institutions such as the Huntington, Folger, Houghton, and New York Public Libraries; on publications such as the Colophon, Donald Wing’s S.T.C., and the bibliographies of Henry R. Wagner; and on major gifts of collections, exhibitions, and the contemporary auction scene.
This collection will appeal to all who are interested in Americana, bibliography, book collecting, and in revisiting an important decade in American book history, guided by an insider with perceptive wit and literary style.

A signed, numbered (I-XX) series [ALL SOLD]
Collectors can purchase a signed, numbered copy of the book paired with a complete original issue of the New York Herald-Tribune BOOKS from 1940, containing a “Notes for Bibliophiles” article NOT reprinted in the book, and housed in an archival portfolio. $100.00 each

VIII         May 5, 1940.  “Early Connecticut Maps” [Maps of Connecticut Before the Year 1800
by Edmund Thompson]; “Franklin as Bill Collector”; “A Picturesque Incident in
Library History” SOLD

IX            May 19, 1940.  Review by Meta P. Harrsen (Pierpont Morgan Library) of The Tickhill
Psalter and Related Manuscripts.  A School of Manuscript Illumination in
England During the Early Fourteenth Century, by Donald Drew Egbert; “New
York Fiction Reading in 1804” SOLD

XII           June 30, 1940.  Review by Robert W. Kenny (Brown U.) of The text of the Canterbury
Tales studied on the basis of all known manuscripts by John M. Manly and
Edith Rickert; “The Fairfield Type” SOLD

XVII        September 22, 1940.  Review of The Elements of Lettering by John Howard Benson
and Arthur Graham Carey; “A Sidney Lanier Concordance”; “A New Manual of
English and American Letters” SOLD

XX           December 29, 1940.  “The Animal Kingdom” by Henry Watson Kent (Secretary of the
Met. Museum of Art) [exhibit at the Pierpont Morgan Library]; “The Beginnings
of the Press in York, Pa.” [The First Printers of York, Pennsylvania by Douglas
C. McMurtrie] SOLD
Posted by Rick Ring at 7:47 AM No comments: