For a book collector a catalog often signifies the beginning of a journey or the culmination of a quest. November’s intimate meeting was the perfect venue in which to share some of the catalogs in our respective collections.  Mike Marell, who collects broadly, treated us to an 1890 catalog of Books Relating to Aaron Burr- a focus of his main collection.  A 1938 fine foods catalog from Charles & Company provided a look at the brands being sold at the time in America and an illustrated 1881 Shoe & Leather Directory furnished us with a look back at an industrial United States.  A Catalog and Price List from the famed toy soldier manufacturer W. Britain Ltd. representing a rich source of detailed information for students of military history, theatrical costumers, artists and illustrators, as well as collectors of toy soldiers documents a company that has been in business since 1893 now has a Web site and two online collector’s clubs; one in the U.S.A and one in Britain.

We had the pleasure of looking at a few Sotheby’s Catalog’s listing prices for rare book sales; each one beautifully printed and illustrated:  A Private Collection of Illustrated Books and Fine Bindings-June 2001 and Modern French Bindings and Illustrated Books-June 2002, and Six Centuries of Book Bindings.

Catalogs of children’s books from Bauman and Swann and PBA Galleries are always informative.  Jo Ann Reisler, Ltd.’s Catalog ’69 printed on glossy paper with an insert by Hague is a gem in itself.  In tribute to LIBC founders, David King shared catalogs from the past:  Herman Abramson’s Catalog of the Christopher Morley Collection, Esther and Leonard Geller’s ElGen Books, Scientific and Medical Books, Beatrix Potter, and Dictionaries,  and Paulette Green’s Mysteries and Art Books. To mark this election year David brought an historic presidential catalog: J.F.K. 1917-1963: A President of Youth and Courage, Of Charm and Wit, of Promise and Hope.

Two catalogs representative of both art and writing were a Juliao Sarmento exhibition catalog from a Parrish Art Museum gallery talk on Artists and Writer and a catalog of The Morgan Library’s permanent collection.

Antiquarian Book Dealer, Collector and Appraiser, Lee Temares led our December discussion on the de-accessioning of book collections when age, infirmity or a move necessitate a sale.
Key questions that each collector must answer before making a decision include: How Is the collection organized? How much of it is for sale? How much of it is ephemera to be sold separately? How can the value be correctly assessed at the time of sale or donation? Do you want to sell or do you want to donate? Are you willing to break up your collection on your own, prior to offering it to a University, a Library, an individual Book Collector or a Rare Book Dealer?

LIBC’s members hold collections of between 2,000 and 16,000 books. The conversation turned to the problems of getting a written agreement from a buyer or an institution upon acceptance of your collection.  Lee Temares recommended AddAll.com as a reliable Website for checking current book values in ascending order with an awareness of the dealer in order to see whether the dealer is offering more than one copy of a given title.  Rule of thumb:  If a dealer pays you less than 15% of the average going price, you are accepting too little. In general there was agreement that listing books as a charitable donation on one’s income tax return for under $5,000.00 was prudent.

It was agreed that the limitations of shelf-space and staff in University Libraries and Public Libraries make it impossible to ensure that one’s books will be a priority or that they will be put on display or that they will not be sold by the institution.  For many of us, our collections have been acquired for the pleasure of owning them, displaying them, and reading them—what happens to them after we are no longer alive is secondary.  In conclusion we did agree that the most valuable books should be marked and cataloged so that heirs will be able to make an informed decision. For those determined to sell or donate as much of their collections as possible, the process is likely to be labor intensive and one cannot start too soon!

At present it is likely that a collection will be easier to sell or to donate if it is broken up.  It is more difficult to sell a collection in its entirety. Large auction houses are only interested in books worth $500.00 or more. Even smaller auction houses (Swann Galleries) are reluctant to have shelf sales. It is important to note that in a shelf sale, you will be charged for picture taking and cataloging.
The death of Bob Wilson, author of Modern Book Collecting was noted. (New York Times Obituary December 11, 2016) as well as the special NYT Travel Section in Sunday’s paper featuring independent bookstores around the globe and across the United States.

On a January evening members of LIABDA and LIBC gathered to listen to a lecture by Mike Silver, author of Stars in the Ring: Jewish Champions in the Golden Age of Boxing by Mike Silver. For more than sixty years—from the 1890s to the 1950s—boxing was an integral part of American popular culture and a major spectator sport rivaling baseball in popularity. More Jewish athletes have competed as boxers than all other professional sports combined; from 1901 to 1939, 29 Jewish boxers were recognized as world champions and nearly 200 others were ranked among the top title contenders in their respective weight divisions.  The author spoke about boring’s significant role in the Americanization process for an immigrant population struggling for acceptance into the social and economic mainstream in the early decades of the last century.
In February Myron Sywack, posited that as time goes by a book often becomes a memento.  By way of example, he shared a book on Gustav Mahler by Henry Louis de la Grange (unread).  When he took it off the shelf and opened it, he found that it was signed by the author and dated Dallas, 2000.  The rediscovery of the book, lead him back to a wonderful evening spent in Dallas with his son seventeen years ago. In some ways, books return us to ourselves; giving us an opportunity to relive and savor events that might otherwise have been forgotten.

A Seinfeld script for “The Contest” episode of the successful sitcom signed by cast members was shown.  We enjoyed leafing through a limited edition of A Dish of Apples that including inlays and prints illustrated by Arthur Rackham ; Invitation Strictly Personal: 40 Years of Fashion Show Invites, a sumptuous catalog of graphic art invitations to the fashion shows of stars like Vivienne Westwood, Jean Paul Gaultier, and John Galiano; Manifold Destiny: The Guide to cooking on Your Car Engine,  a catalog titled The Michelin Man and Aeronautical Aviation Bookplates (limited edition) containing bookplates illustrated with vintage airplanes and balloons. An 1898 edition of the bestselling children’s book Sanford and Merton printed with chromo lithos by McLoughlin Brothers; Before the Animation Begins: The Art and Lives of Disney’s Inspirational Sketch Artists (including the story of Tyrus Wong who came to America as a Chinese “paper son” incarcerated on Angel Island with his father—endured hardship but gained recognition later in his life as an artist and painter best known for his background illustrations for the Disney film Bambi; an exhibit Rembrandt’s Century, Robyn Lea’s Dinner with Jackson Pollock filled with the artist’s family recipes and photos, and a small beautifully produced 2016 book by A.S. Byatt Peacock and Vine on William Morris and Mariano Fortuny published by Knopf with attention to photos, endpapers, and cloth boards—even in this paperless era.

Foremost collector of American Pulp Fiction, Joe Rainone treated LIBC to a selection of original books, newspapers, broadsheets and facsimiles chronicling the first 100 years of detective and mystery fiction published in pre-twentieth century America. To better understand the original source of these stories, Joe referenced the first appearance of an organized police force (Samurai) in 1603 Japan, London’s Old Bailey Criminal Court in 1674, the Bo Street Runners in 1749 and the prefecture of the French police in 1800.

IN 1774 The Terrific Register based on stories of criminals who got their just deserts was published. The five volume set became the most widely collected book in the world based on crime and punishment. The 1825 version contains the first appearance of Sweeney Been who later became the inspiration for Sweeny Todd.

In a May meeting of officers of Long Island Book Collectors (LIBC) and the President and Vice President of Antiquarian Book Dealers Association of Long Island (LIABDA, LTD) was held.  In September 2017 the two groups will merge in an effort to preserve the presence of book collecting in Long Island in Nassau and Suffolk counties. The newly formed organization will be called LIABDA, LTD. / LIBC. Members of both groups will be invited to all meetings. 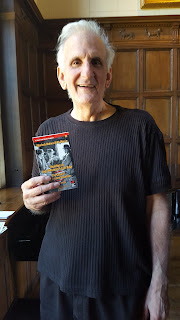 At our June luncheon, writer and Sherlock Holmes expert Gary Lovisi guided us through the careers of both the fictional Sherlock Holmes and the talented nineteenth century British doctor and advocate of deductive reasoning, Joseph Bell on whom the character is based. Arthur Conan Doyle based Watson on himself—an easy leap as Doyle was a young physician who served as assistant to the formidable doctor.
Mr. Lovisi’s latest book, Sherlock Holmes & Mr. Mac contains two crime novellas, inspired by the detective Mr. Mac mentioned by Holmes in The Valley of Fear. As an avid reader of books by Edgar Rice Burroughs, Henry Kuttner, Jack Vance, Isaac Asimov, Raymond Chandler, Dashiell Hammett and C. S. Forrester Mr. Lovisi became a writer of detective stories.  Over the years he became a collector of pulp and vintage paperbacks.  This led in turn to publishing essays on this collections and bibliographic work. His annual NYC Pulp Fiction and Paperback Expo is now in its twelfth year.
Mr. Lovisi spoke candidly of his two-phase writing process—editing his own work and then having it edited professionally.  He described the pressures of conforming to a predetermined page count that can at times involve cutting thousands of works from a text.  While he relishes the editorial control of independent publishing, he is appreciative of the guidance, prestige and pay provided to writers by mainstream publishers.
A writer for over forty years, Mr. Lovisi is ever brimming with excitement at the thought of the next story based on a Holmesian villain or a small subplot in one of the original novels.  His audience is ready and waiting.
LIABDA, LTD. /LIBC wish all fellow bibliophiles a summer full of excellent reading and collecting.
Posted by Rick Ring at 5:57 AM